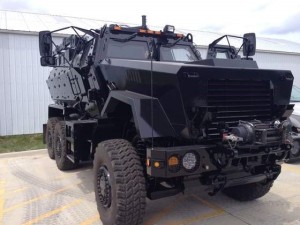 The arsenals of dozens of Iowa law enforcement agencies now include crime-fighting tools from the U.S. military, but on Monday, President Obama put an end to the Defense Department’s sale or donation of some of that equipment.

“Three years ago, when you’re in the Boston Police, going around Boston trying to find a couple of people that killed five or six people at the end of the Boston Marathon with bombs and you don’t know how many bombs there might be in the city, having some of these armored vehicles to protect the police may be the right thing to do,” Grassley says.

“I don’t know about the vehicles, but I sure agree with the grenades and grenade launchers,” Grassley says. “I don’t know why they would be used domestically. Another thing is, evidently, we used to give out bayonets. I don’t think police departments would need bayonets.”

In some instances, true surplus items the military no longer plans to use are being donated to local law enforcement offices at the city, state and county levels. Grassley says, “Considering what the alternative is, if the government’s got surplus and it’s just going to be simply destroyed and you’re going to waste the taxpayers’ money at the federal level by destroying things that can be used at other levels of government, I don’t think the taxpayers’ money should be wasted.”