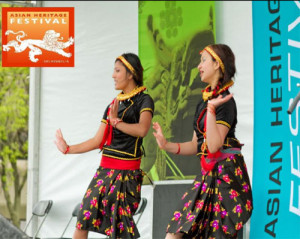 The CelebrAsian Asian Heritage Festival is this weekend in Des Moines.

The groundbreaking efforts of Iowa’s governor four decades ago to bring home to Iowa refugees displaced by the Vietnam War will be the focus of this weekend’s CelebrAsian Asian Heritage Festival in Des Moines.

Nu Huynh, executive director of the Iowa Asian Alliance, says the two-day event is expected to draw more than 50,000 people of Asian heritage — and from all other cultures — from across Iowa.

“This year is very meaningful and special for us because it is the 40th year anniversary of the resettlement of Southeast Asian refugees here in the state of Iowa,” Huynh says. “We are specifically calling our theme this year the Ray of Freedom.” Then-Governor Robert Ray visited refugee camps in 1975 and offered to accept thousands of the so-called “boat people” who had been driven out to sea by the Vietnamese government. Iowa’s humanitarian efforts won world acclaim. Huynh says Governor Ray’s efforts are being recognized anew.

“There will be a Ray of Freedom exhibit that will feature storyboards telling the stories of refugees who are now Iowans who have made Iowa their home,” Huynh says. “It will also talk about some of the unsung heroes.” Those heroes include the teachers, sponsors, churches and others who did so much work behind the scenes to make the newcomers feel welcome and to help get them established as citizens.

“We get very emotional about it,” Huynh says. “My mother and I did a Skype interview for the Cooking Channel and she just asked us simply, ‘How did you get here and what was your journey like?’ and it’s the first time I’ve heard my mom talk about it. She started crying and then I started crying.”

The 13th annual festival runs Friday and Saturday at the Western Gateway Park in downtown Des Moines. Admission is free. The event showcases more than a dozen Asian “villages” that represent distinct communities living in Iowa. Each village displays food, culture, history, arts and crafts indigenous to their culture.

In addition, there will be a host of other entertainment, including: karaoke, a Bruce Lee tribute, martial arts demonstrations, an eight-foot-tall talking robot and a table tennis tournament.