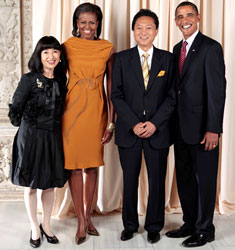 The former prime minister of Japan will be in southeast Iowa this week. Yukio Hatoyama, the Japanese prime minister from 2009-10, will deliver the commencement address at Maharishi University of Management in Fairfield on Saturday.

University President Bevan Morris says he first met Hatoyama in Tokyo in late 2013 and he was very impressed. “He’s been practicing transcendental meditation for over 25 years as has his wife,” Morris says. “They expressed a great interest in our university and the possibility of having such an institution in Japan, that is a consciousness-based educational school or university there to enrich the life of Japan.”

In addition to being the guest of honor at the graduation ceremony, where he’ll receive an honorary degree of Doctor of Laws, Morris says Hatoyama will given the full Fairfield experience.

“He’ll be visiting the classes at the university and of our school,” Morris says. “He’ll be visiting the Sustainable Living Center, one of the greenest buildings in America. He’ll be having his EEG studied to see how coherent his brain waves are at our Center for Brain Consciousness and Cognition.”

Morris notes this will be the largest-ever class to graduate from Maharishi, with graduates representing 61 different countries. “There’ll be 391 graduates this year, including 158 in the computer science master’s program,” Morris says. “We have one of the largest computer science master’s programs in the United States, so yes, this is our record year.”

The small school has drawn many big names to its campus for graduation ceremonies and other events, including film director David Lynch, CNN reporter Candy Crowley and singer Mike Love of the Beach Boys. Last year’s commencement speaker was actor Jim Carrey.