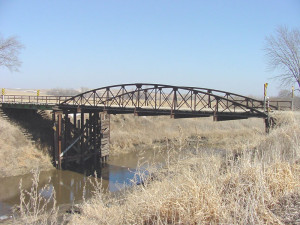 Scott Neubauer, bridge maintenance and inspection engineer with the Iowa Department of Transportation, says most of the bridges at issue carry very few vehicles.

Most of the old bridges in Iowa deemed structurally deficient have weight restrictions posted. Neubauer says many counties don’t have enough money to fix those bridges and choose to focus on the structures that carry the heavy trucks and traffic volume. “That’s why some of these stay deficient for so long,” Neubauer says. “It’s just on such a low volume road and carries such a small amount of traffic and the traffic it is carrying, the bridge is adequate…and it’s not really a hindrance to anybody, so the county just does the bare minimum to maintain it.”

Neubauer says it’s possible many Iowa counties in the coming years will direct more money toward repairing or replacing old bridges from funds generated by this year’s increase in the state’s gas tax.