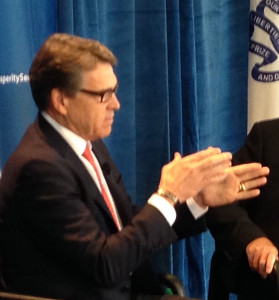 Former Texas Governor Rick Perry today said, as president, it would be “inhumane” not to employ controversial “enhanced interrogation techniques” like waterboarding if a terror suspect might give up critical information that would save lives.

“I would suggest to you the president of the United States needs to be thinking about this just like you think about it as a husband and/or a father,” Perry said.

Perry spoke today in Des Moines at a forum sponsored by Americans for Peace, Prosperity and Security. He was quizzed by a panel that included the chief intelligence reporter for the Associated Press.

“If we know for a fact that there are individuals that are going to kill maybe millions of Americans and there are then I would suggest to you that it would be inhumane for you not to use those techniques,” Perry said.

As the audience applauded his answer, Perry was asked: “Where do you draw the line?” and Perry answered: “Oh, I don’t know, Maybe that rectal feeding would be the line that you would draw.” The audience laughed.

Perry, who was an Air Force pilot, answered a series of questions about the military and foreign policy. For example, Perry expressed support for sending U.S. troops back into Iraq to deal with the advancing Islamic State terrorists.

“We’re air power guys, but we also realize that we cannot do this without boots on the ground, particularly to identify the targets,” Perry said.

According to Perry, it’s important to use every tool possible to combat “radical fanatacism” — and that includes unmanned aerial drones.

Perry is wrapping up a five-day-long campaign swing through Iowa. He is expected to formally announce in June that he’ll run again for president.