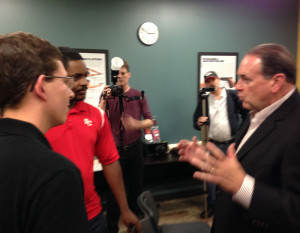 Mike Huckabee has become the second prominent presidential candidate to announce he will not participate in the Iowa GOP’s Straw Poll in August, but Governor Terry Branstad discounts the idea the event may not happen.

“I expect there will a lot cadidates that will participate in that as there have been in a lot of the other events,” Branstad told reporters late this morning.

Huckabee called the Straw Poll a “non-binding and expensive” event that “will only wound and weaken the conservative candidates” who’d be forced to spend their limited campaign cash to battle it out.

Branstad, a Republican, said it’s too early to say the Straw Poll is sinking.

“There’s a lot of candidates and each candidate will make their own decision as to what they will participate in,” Branstad told reporters.

A year and a half ago Branstad said the Straw Poll should not happen, but in January the Iowa GOP’s governing board voted unanimously to have it. Last week the party announced it would pick up the cost of party tents for each candidate that plays in the Straw Poll, but most candidates are still weighing the expense of purchasing the $30 tickets for supporters to ensure they’ll do well in the Straw Poll vote.