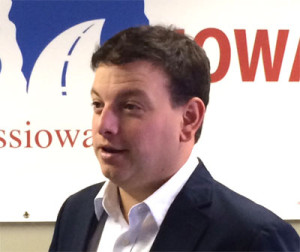 “This happened over the last week or so, so it’s been a very quick turn-around for these signers and we expect more to sign,” Sinovic told reporters. “But we saw Governor Branstad was signing this proclamation today and thought this would be an appropriate time to make these voices heard.”

“Frankly, the governor signing this proclamation is laughable,” Sinovic said. “He’s putting these policies in place that hurts Iowans and now he’s taking a curtain call, pretending to be in favor of quality mental health care. I mean, it’s ridiculous.”

Sinovic said there is currently no plan in place to care for the acutely ill Iowans who depend upon the state-run Mental Health Institutes for care they cannot get elsewhere at privately-run facilities. According to Branstad, his critics just want to “protect the status quo.”

“What we’re doing in Iowa is really long overdue,” Branstad told reporters during a statehouse interview. “Many other states have done it before.”

Branstad’s state budget plan released in January did not include any operating funds to keep the Mental Health Institutes in Clarinda and Mount Pleasant open past June 30. Legislators are still wrangling over budget details, but it’s unlikely Branstad will accept any plan that keeps the two facilities open indefinitely.