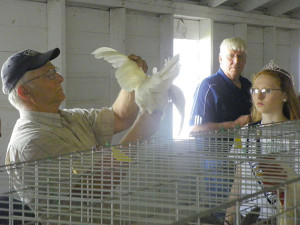 This photo from the Wright County Fair website shows poultry judging in 2014.

The avian flu epidemic is forcing state agriculture officials to consider new rules about upcoming poultry shows with the possibility of canceling events at the Iowa State Fair and a host of smaller events across the state.

Wright County has more poultry than any other county in Iowa, with some 15 million birds at 20 operations. Rosendahl says the poultry show is one of the fair’s more popular events each year.

“We do have a large number of exhibitors in that building and with those projects,” she says. “We appreciate the support the community gives to us and we want to make sure we’re being a member of the team and what’s happening and support the efforts to keep it from spreading.”