You are here: Home / Health / Medicine / Deaths of infants leads to warning about sleeping with babies 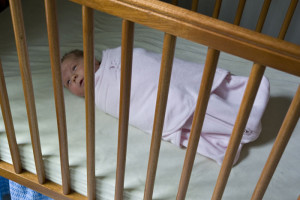 Parents are being warned about the dangers of sharing a bed with babies following the apparent accidental suffocation deaths of three infants within the last week in Des Moines. In all three cases, a parent had been sleeping with the child in their bed and woke to find the baby wasn’t breathing.

Janna Day, with the group Safe Kids Iowa, warns against the practice of “co-sleeping.” She says an infant can easily suffocate when their mouth and nose are covered by a loose blanket or pillow. “And a smothering incident could occur if, unfortunately, one of the parents or caregivers actually rolled onto the child,” Day says.

The American Academy of Pediatrics recommends a baby should be placed in its own sleeping area, such as a bassinet or crib. Day says it should only include a mattress with a tight-fitting sheet. “We want to put that baby down on their back and we also want to make sure there is nothing extra in the crib or bassinet with the baby, meaning we don’t want any extra blankets or stuffed animals,” Day says.

The Polk County medical examiner is still reviewing the recent infant deaths in Des Moines and has not determined an official cause of death in any of the cases.