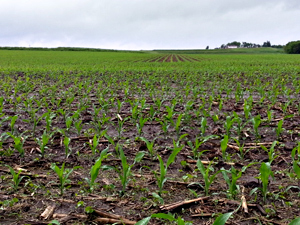 A drop in commodity prices has hit farm income.

Farm income is falling for many growers in Iowa and across the region as credit conditions weaken.

Nathan Kauffman, the Omaha branch executive with the Federal Reserve Bank of Kansas City, says lower crop prices and high input costs have cut profit margins and raised concerns about the ability of farmers to repay loans down the road.

“In the last several years, profits have been so good in agriculture that a lot of people have been making pretty good money,” Kauffman says. “Now, a lot of bankers and other lenders are looking at where the risks are, wanting to understand what level of working capital do their borrowers have, is it sufficient to get them through these times?”

Recent years have brought many producers across the Midwest severe droughts and flooding while commodity prices rebounded only slightly after dramatic drops, while facing higher costs for seed, fertilizer and chemicals. It’s left many farmers short on cash.

“Operating loans have picked up because of lower incomes,” Kauffman says. “There has been a need for more financing of some of those short-term expenditures and I think we’re seeing more lenders that just want to be cautious and recognizing things are still pretty good overall and they have been very good, but being cautious about what that means for the next year or so.”

Kauffman says cropland values edged down in the first quarter this year while pastureland values held firm. “The land that’s very high quality still does seem to be selling quite well,” Kauffman says. “The land that is maybe not quite as good, we do see some variation there. There are stories of no sales at auctions, we see other weaknesses in that side of the land market but overall, there has been a bit of downward pressure because of the lower incomes.” Profit margins in the livestock industry have remained stable, but he says most bankers don’t think farm income or credit conditions will improve in the next three months.