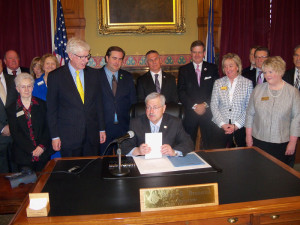 Governor Terry Branstad and officials from the state colleges and univerisities.

Representatives of higher education in Iowa gathered in Governor Terry Branstad’s office today as he signed a bill that sets national standards for courses offered on-line by schools.

“It’s a great example of bipartisan cooperation and the involvement of all sectors of higher education, the public universities, the private colleges and universities and community colleges,” Branstad says.

The bill lets Iowa apply to join 23 other states in what’s called the State Authorization Reciprocity Agreement or SARA. “Belonging to SARA means that a state’s public and private higher education institutions pay a fee to SARA, which automatically registers their distance education courses and programs in other member states, instead of having to register and pay a fee in each of the 50 states,” Branstad explains. 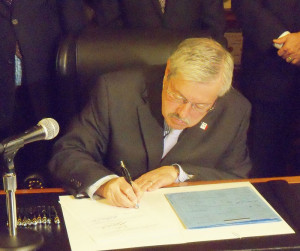 The governor says paying one fee will cut the costs each school has to pay, which should cut the costs students pay to attend the institutions. “Participating in SARA also gives Iowa colleges and universities an important competitive edge in the fast-growing world of distance education,” Branstad says.

Getting the bill completed required finding a way to reimburse students when there are differences in tuition. The governor suggested creating a fund that could do that, which led to some levity between Branstad and Attorney General Tom Miller at the bill signing. “We came up with I think a novel idea,” Branstad started to say and Miller cut in and said, “It was your idea, it was a brilliant idea,” which led to laughter from the group. “Well, I want to be humble about it,” Branstad replied to more laughter.

Attorney General Miller found the money for the fund and the bill went on to pass the Iowa House and Senate unanimously. Branstad said he expects the plan to become even more important as the use of distance education increases.