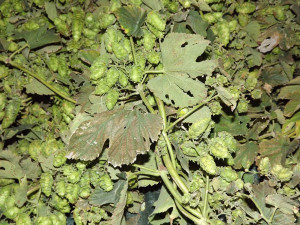 Planting is underway near Solon in eastern Iowa on a the state’s largest farm for the key ingredient in beer. Five friends and relatives with a background in traditional crops have invested nearly a half-million dollars into “Buck Creek Hops” in Johnson County.

Dan Paca owns the land with Mark Pattison and 25 acres is prepped for 25,000 hops plants. It’s in response to the home-grown beer industry. “As the microbrew industry has grown 18-23 percent the last four years there’s a shortage of hops,” Paca says.

He says they believe there’ll be demand for the crop and that’s why they created a business plan. “We all sat down and we put it together and we tried to be real conservative on the amount that we’ll be producing per plant and per acre, but with the shortage right now the demand is there so there’s a pretty good price so I think we’re getting in at the right time,” Paca says.

The layout doesn’t look like anything you’d see in a traditional farm field, with 1,500 wooden posts spaced out, each one soaring 18 feet high. Heavy wire will be strung between them so the hop vines can be trained to grow skyward and kept off the ground. Solon farmer Doug Black grows corn and beans, and was hired to manage the hops operation.

He says his farmer friends are curious. “You know I don’t know if they think were totally nuts but some of them think we probably are,” Black says. “They’re  very innovative and entrepreneurial, so they’re interested to see how this all looks, right now it looks like cables on poles and that’s it.” The terrain will change fast; hop vines can grow 20 feet in a season.

Emerald curtains will soon be draping the hillsides, and co-owner Dan Paca can’t wait. “I grew up in north-central Iowa and they’ve  just recently put some wind farms up there, so it kind of reminds me of that landscape, but once the hops start growing it gets real green and lush — so it’s going to be absolutely beautiful, a beautiful landscape here,” according to Paca.

Buck Creek isn’t alone in smelling opportunity. The hops shortage is real, according to the publisher of Midwest Micro Brews. But new hop yards are breaking ground daily. Iowa State University even has its first hops consultant, extension specialist Diana Cochran. “The interest in all the microbrews made people think well with the whole buy local food movement, what about buying local hops,” Cochran says.

In spite of high startup costs, Iowa hobby growers are inquiring about going the extra step. Cochran says though, it’s still a tiny crop. “I’m going to say 15 to 20 commercial growers and then I get calls probably at least once twice a week with people wanting more information on growing hops,” Cochran explains. Buck Creek is ready to take orders for its 2015 crop.

Hops can sell for upwards of $25 a pound. When the new acreage reaches full potential in a couple years, the fall harvest could hit 70,000 pounds. They still have some left from last year’s test crop, and marketing director Jamie Bell says they have a plan to raise awareness of Iowa hops.

“In Colorado you know they have pot brownies, hops are a cousin of marijuana,” Bell says. “You can’t hand out hops, so what are we going to give away at Ragbrai? We found some people who’ve done it before — hop brownies — so were going to do it and were hoping they’ll give it a try.”  There is more than brownies riding on the surge in hops production — there are now more than 400 craft breweries in Iowa and surrounding states.