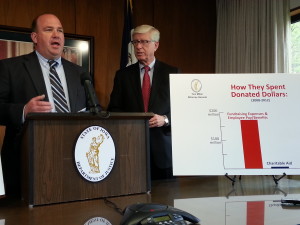 The president of the Greater Iowa Better Business Bureau is urging Iowans to do their research before contributing to a charitable organization.

Chris Coleman’s advice is in response to a federal lawsuit announced this week involving all 50 states against four phony cancer charities. The complaint states the organizations collected $187 million in donations over a five-year period and very little of the money actually went to help cancer victims.

“It gives all of us real heartache because of all of us know family members or friends who are victims of cancer or have suffered through that disease,” Coleman said.

The defendants in the lawsuit include Cancer Fund of America, Cancer Support Services, Children’s Cancer Fund of America, and the Breast Cancer Society. Most donors, upon hearing the charity’s name, probably felt comfortable making a donation. “They borrowed a name of a good charity, I’d say they hijacked it,” Coleman said. “They steal the good reputation of many charities.”

The complaint claims a large majority of the contributions to the sham charities benefited only the defendants, their families and friends, and professional fundraising groups. “If this causes consumers to do more research to verify the legitimacy of charities before they make a contribution, that will help all good charities and we feel confident about that,” Coleman said. “We want our information to spotlight the best charities so people know where to contribute and where their gift can make the most difference.”

Charities can be checked out at the Better Business Bureau’s Wise Giving site.