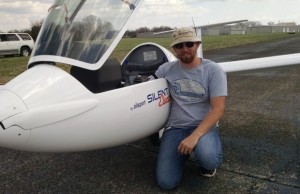 A native of northwest Iowa is one of just two Americans selected to compete in the World Gliding Championships this summer. Tony Condon of Estherville graduated from Iowa Lakes Community College in pre-engineering and finished his education at Iowa State University in aerospace engineering.

“I got interested in aviation in Estherville when I was in high school and went through the aviation program at Iowa Lakes,” Condon said.

The World Gliding Competition happens every other year with each country sending only two competitors. Condon was selected after competing in an event last year near Dallas, Texas.

Glider pilots find pockets of rising air – or “thermals” – and ride them to achieve distance and speed. Condon’s longest glider flight was about 525 miles. The World Gliding Championships will take place in Lithuania from July 28 to August 16.

Condon hopes to compete for many years to come. “I plan to keep competing at the regional and national level and if I’m lucky enough, make the U.S. team again,” Condon said. While at Iowa State, Condon joined a community glider club and eventually became the club’s instructor.

Condon now resides in Wichita, Kansas. He is the son of Iowa Lakes Community College employees Tony and Jody Condon of Estherville.