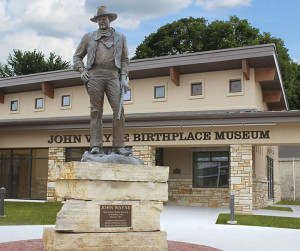 A project that began in 2008 is now complete and the John Wayne Birthplace Museum is open for visitors in Winterset.

The four-bedroom home in which Marion Morrison was born in 1907 has been a tourist stop since the 1980s, but the museum next-door to catalogue the life of the movie star who became known as John Wayne is holding its grand opening festivities this weekend. Joe Zuckschwerdt, the president of the new museum’s board of directors, says a 25-seat theater is a good first stop inside the museum.

“We have a wonderful minute-and-a-half introduction from John Wayne’s daughter, Aissa Wayne, which is just wonderful,” Zuckschwerdt says. “And then we have (an) eight-and-a-half motion picture that highlights John Wayne’s career, from his early days all the way ’til his last movie, ‘The Shootist’.”

Among the items in the museum’s collection is John Wayne’s 1972 Pontiac Safari Stationwagon with its raised roof, so he could still wear a hat while he drove.

“He was 6’4″ and he loved wearing hats, not just western hats,” Zuckschwerdt says. “This was his personal vehicle. He would get in there and drive all over Newport Beach. He was a regular guy.”