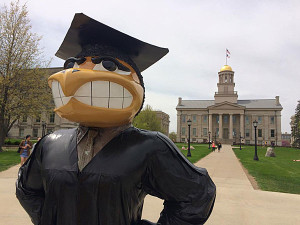 The ACT study suggests it could determine success in college. The research found, “students who choose a major that matches their interests are more likely than those who don’t to remain in that major to persist in college and complete their degree in a timely manner.” Schafer said students shouldn’t worry about losing time while changing majors. That’s because for at least the first year, they are required to enroll in general education courses that award credit for a variety of majors.

“This idea that changing your major at all will delay graduation is probably a misconception,” Schafer said. “We don’t view changing a major as a failure. In fact, it can be a failure to not change a major.” University of Iowa senior Alex Pircer has changed her major twice — most recently going from marketing to interdepartmental studies, with an emphasis on community service. “I realized that I wanted to help people,” Pircer told KCRG. “That’s a big part of who I am. The best way for me to do that, I thought, was to go into something that’s more along the lines of counseling and advocacy.”