You are here: Home / Crime / Courts / Judge rules rezoning around ‘Field of Dreams’ was reasonable 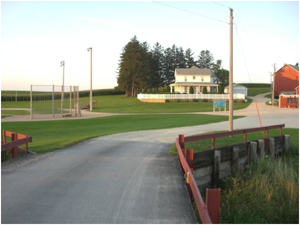 “Field of Dreams” farmstead near Dyersville.

A district court judge has ruled the Dyersville City Council acted reasonably when it rezoned the area around the “Field of Dreams” as commercial rather than agricultural property. Jim Heavens was Dyersville’s mayor at the time the council made that decision.

“This has been something that’s really been weighing on all of us here,” Heavens says. “And I think what it proves or it shows — I’m not a lawyer, but I think the judge got it right — is that what we did here was make a quality decision on the Field of Dreams project from the city’s standpoint.”

A Chicago developer has plans to build a youth sports complex around the iconic baseball field featured in the 1989 movie, but a coalition that includes neighbors around the “Field of Dreams” filed a lawsuit nearly three years ago protesting the Dyersville City Council’s decision. Susan Hess is the attorney who represents the “Residential and Agricultural Advisory Committee”.

“I really felt very strongly that the city did not follow the correct process,” Hess says.

Hess says the group will “most likely appeal” today’s ruling. Hess says farmers in the area who joined the lawsuit are concerned about the increased traffic around the proposed sports complex, which would have 24 baseball and softball diamonds.

“They’re farming different properties and so they’re moving around and hauling a lot of heavy equipment,” Hess says. “Their concern, obviously, was that it would not be safe for a large facility to be put there in the middle of an area that’s largely agricultural.”

Former Mayor Heavens says the judge’s decision “vindicates” the action he and the rest of the city council took.

“We were called corrupt and all kinds of names in public, but what happened here was that they took all the documents that were related to this thing, seven days of trial, hours of city council tapes and planning and zoning tapes,” Heavens says, “essentially put that decision under a microscope and found out after all was said and done that, yes, we did everything according to the rules.”

The district court judge ruled the decision to rezone the property was “made reasonably.” The “Field of Dreams’ is about 3 miles northeast of Dyersville.