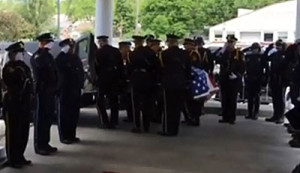 Hundreds of mourners gathered in an Omaha church — with several thousand more and at an arena nearby — to pay their respects this morning for Iowa native and Omaha Police Officer Karrie Orozco.

The 29-year-old new mother was fatally shot in the line of duty last week in a shootout with a wanted man, who was also killed.

Dozens of law officers were called to attention as Officer Orozco’s flag-draped casket was brought to St. John’s Catholic Church in the midst of a steady rain.

In a tradition that dates back centuries for a fallen comrade, a riderless horse was escorted to the steps of the church, as the rows of uniformed officers saluted.

The church on the Creighton University campus holds about 700 people and it was packed for the service. Hundreds of law officers from Nebraska, Iowa and elsewhere were part of the overflow crowd that watched the funeral on the jumbotron TVs at the CenturyLink Center in downtown Omaha. 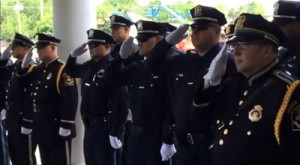 The Reverend William Bond, of St. Joseph’s Parish, was among the speakers. Reverend Bond said the very large crowd was assembled for a series of reasons.

“Perhaps the reason so many people are here is respect,” Bond said. “All of you who are here to show your respect for Kerrie and for all of our law enforcement officials and other first responders who place their lives in danger every day to protect and promote the common good.”

He called Orozco a servant of God who made prayer a part of her daily routines, including in her squad car. “Oh, God, hear our prayers on behalf of your servant, Kerrie, whom you have called out of this world,” Bond said, “and because she put her hope and trust in you, command that she be carried safely home to heaven and come to enjoy your eternal reward.”

Reverend Bond had performed the wedding service for Officer Orozco and her husband, Hector. Bond thanked the hundreds of law officers in attendance for their service. Iowa Governor Terry Branstad also attended the service.

“I do want all of our police and law enforcement officers and first responders to know, we respect each one of you,” Bond said. “We know that all of you, every day you go to work, show yourselves willing to make that ultimate sacrifice for us.” Orozco was laid to rest in a dark blue coffin, with burial at St. Joseph’s Cemetery in Council Bluffs.

Orozco is the first female police officer to die in the line of duty in Omaha history. Orozco was a Walnut, Iowa, native and a resident of Council Bluffs. She was married and had three children. Her daughter, Olivia, was born premature on February 17th and had been hospitalized since birth. The infant was due to be released from the hospital the day after the shooting, the same day Orozco was to begin her maternity leave.

Orozco was on the police force more than seven years. She coached baseball since 2009 in the North Omaha Boys and Girls Club, she volunteered with the Special Olympics, she was president of the Police Officers’ Ball to benefit the Special Olympics, she took in rescue dogs and she was a Girl Scout mentor. Omaha’s police chief called Orozco a treasured member of the department and her death is tragedy.