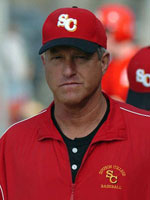 A longtime coach for the Simpson College baseball team was killed in a car crash Monday night. An Iowa State Patrol crash report indicates 65-year-old Joe Blake of Indianola lost control of his vehicle around a curve shortly after 8 p.m.

The car rolled and Blake, who was not wearing a seatbelt, was thrown from the car and died at the scene. Joe Blake, who was drafted by the New York Yankees and played in their minor league system in early 70s, was in his 30th season as the pitching coach for Simpson.

All four of Blake’s sons played professional baseball, including Casey, who retired as a Los Angeles Dodger in 2011. Ben Blake, also Joe’s son, is the head baseball coach at Simpson.