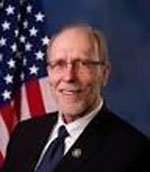 The lone Democrat in Iowa’s congressional delegation is criticizing the way the Obama Administration is presenting a pending trade deal to congress. Congressman Dave Loebsack, a Democrat from Iowa City, says forcing members of congress to go into a “secret room” to look at the proposal Trans-Pacific Partnership is the wrong approach.

“That’s not the way to create a public policy in America that affects so many folks and potentially could do great good, could do great harm as well,” Loebsack says. Members of congress are not allowed to take notes while reading the proposed trade deal involving the United States, Japan and 10 other countries.

Loebsack says he and his congressional colleagues must turn in their cell phones and other electronic devices, too, while viewing the documents. “The agreement isn’t finished yet. We’ll see what it looks like in the end,” Loebsack says. “But, for now, I think it’s really important that folks know this isn’t being exposed to the light of day, in that sense.”

The U.S. Senate voted last week to give President Obama “fast track” authority so congress cannot press for amendments to trade deals, but must merely accept or reject the package. Loebsack says he has a “lot of concerns” about that.[capDLtrade3] :23 :for the deal.”

“I’m a member of congress who represents 770,000 in 24 counties and this trade deal is going to affect a lot of people very differently,” Loebsack says. “…I have a difficult time buying the argument that I should just turn over my authority to the president of either party so the president can negotiate a deal and then come back and ask me, ‘Yes or no,’ — whether I’m for the deal.”

The U.S. House will vote on “fast track” authority for the president in June and Loebsack, at this point, sounds like a no. “At the moment, I’m having a lot of difficulty with the trade promotion authority, the fast trade authority,” Loebsack says. “I’m not tending in that direction by any means.” Both of Iowa’s Republican senators voted for the bill, arguing expanded trade is important to Iowa’s economy.

Many of the countries involved in the Trans-Pacific Partnership negotiations — including Australia, Canada, Mexico and New Zealand — have been reluctant to conclude the trade talks without the guarantee that the U.S. congress wouldn’t try to make changes in the deal.