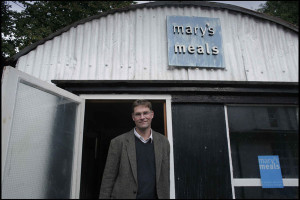 A Scotsman who Time magazine calls one of the world’s 100 most influential people will be in Iowa this weekend to spread the story of his incredibly successful charity.

Magnus MacFarlane-Barrow says he and his brother only wanted to help feed the suffering people in Bosnia during the war there in 1992.

“We had launched a little appeal in our village in the Highlands of Scotland and we were just overwhelmed with the kindness of people,” MacFarlane-Barrow says. “That one-off appeal gave birth to an organization that eventually became Mary’s Meals.” The charity, named after the mother of Jesus, now feeds more than one-million children daily on five continents.

The unprecedented accomplishment has brought the former salmon farmer an audience with Pope Francis, lunch with Queen Elizabeth at Buckingham Palace, and CNN has named him one of ten “world heroes.” MacFarlane-Barrow, the founder and CEO of the nonprofit, says he’s “uncomfortable” with the recognition but knows it’s not about him, but the work of the many volunteers globally.

“I never, ever imagined it would go to this scale at all,” MacFarlane-Barrow says. “I think this very simple thing we do, providing one good meal every day in a place of education for the world’s poorest children, it works. It meets an immediate need for food and it gets them into the school where they can gain that education. People all over the world are starting to support this very simple mission.”

Almost all of the food is grown locally, cooked and served by local volunteers, which he says is a key component to the model. “The project is owned, first and foremost, by the local community who volunteer their time to do all the cooking and serving of the food,” MacFarlane-Barrow says. “This is never about us coming in from outside and imposing our ideas or our solution. It’s about supporting those local communities to do it themselves.”

The 47-year-old Scotsman has written a book about his remarkable experiences called, “The Shed That Fed a Million Children.” He was keynote speaker of last year’s World Hunger Summit in Des Moines and he’ll be making three Iowa appearances over the next few days.

“I’m looking forward to coming back to Iowa because I always feel very at home in your part of the world and have many good friends there,” MacFarlane-Barrow says. “I think there is something about people who come from farming backgrounds who understand this simple mission of ours. It seems to resonate in a particular way in Iowa.”

MacFarlane-Barrow will appear at 6:30 P.M. on Friday at St. Mary’s Catholic Church in Solon, at Smith Chapel at Simpson College in Indianola at 8:30 A.M. on Saturday, and at St. Francis Church in West Des Moines at 5:30 P.M. on Saturday.