You are here: Home / Business / More details on $42 million project in Muscatine released 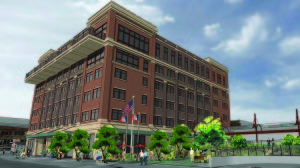 Developers of a $42 million project in Muscatine that’s getting financial help from the state say they’ll break ground in September. Officials with the hotel, to be built along the Mississippi River, provided more details about the project on Wednesday.

Andy MacLellan is the chief operating officer for the Merrill Hotel and Conference Center, which will include 114 rooms and suites. The six-story building will feature a ballroom and conference space on the top floor. “It’s 12,500-square-feet and a very flexible space,” MacLellan said. “One of the major features is a 1,250-square-foot terrace that overlooks the Mississippi River, so it’s wide enough that you can do events out there, receptions, sit-down dinners, that sort of thing.”

In March, the Iowa Economic Development Authority Board awarded the project with a $10 million tax rebate. It’s also being funded by a $21 million USDA loan.

Some other features of the project include a fitness space with a spa, an indoor pool, a “light fare” restaurant, and a connection to a former hotel that now houses condominiums, two restaurants and a bar.

For many years now, the city of Muscatine has been without a downtown hotel or meeting space. “Yet, most of the business in Muscatine emanates from downtown, from the major industries here, but it all leaves the city because there’s no place to house people,” MacLellan said. “This will obviously give the city the opportunity to not only host those major businesses, but lots of other venues.”

The hotel is named for the lead investor of the project, 91-year-old Stanley Merrill Howe, the former president and CEO of Hon Industries. The Merrill Hotel and Conference Center is slated to open in the summer of 2017. It’s expected to create around 50 full-time jobs, plus part-time jobs.