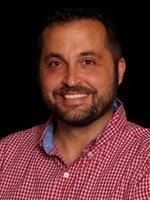 A psychiatrist in central Iowa is among the first in the state to use a new type of therapy for patients with what’s called treatment-resistant depression. It strikes five to six-percent of the population, people for whom counseling and drugs simply don’t work.

Dr. Eric Barlow, of Urbandale, says he’s been offering his patients transcranial magnetic stimulation, or TMS, for about a year now with excellent results.

“It’s a very targeted treatment where we can literally modulate or affect the activity of individual neurons in the brain right at the area of the brain where depression is, in essence, born,” Dr. Barlow says, “the biological generation center for depression which is in the left frontal part of the brain.”

During a treatment session, patients sit in what looks like a dentist’s chair and have a special helmet placed on their head.

“Usually, the treatment sessions are such where we do 20 to 30 treatments in an acute series which takes four to six weeks because they’re 20-minute treatments, five days per week,” Barlow says. “Usually about two weeks into the treatment, people start to feel a little bit better. That’s an average, some are sooner than that, some are later in that month.”

While some patients might experience a slight headache or fatigue after the treatment, it’s not usually painful or even uncomfortable.

The TMS device used in the treatment was approved by the Food and Drug Administration in 2013 and Barlow says he’s treated more than 100 patients with it in the past year.

“I’ve not seen such a robust response with anything that I’ve used over the course of over 12 years of clinical practice in psychiatry than I have with this treatment,” Barlow says. “Probably 80 to 85% of the folks that we’ve treated have shown marked improvement.”

Transcranial magnetic stimulation represents a significant advance in the treatment of depression, he says, one that is much safer than other therapies. Barlow’s office at Compass Clinical Associates in Urbandale is offering a free informational session on TMS on June 16th.