You are here: Home / News / Teams sought to pull an airplane in Special Olympics fundraiser 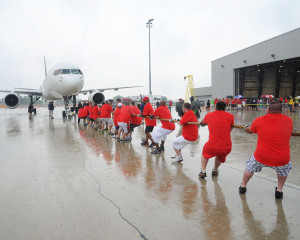 A Special Olympics plan pull is set for June 6th.

Special Olympics Iowa is gearing up for a major fundraiser at the Des Moines airport on June 6th when teams compete in the second annual Plane Pull.

Special Olympics chair Steve Palmer is a retired police officer and he coordinates the event. He says they will pull a 757 that weighs 160,000 pounds. “We call it 60 tons of pulling fun,” Palmer says.

Palmer says there is still time to register for the event and all the proceeds will benefit Special Olympics Iowa. “It is a thousand dollars for a team of 20 or 50 dollars a person. So, there’s still time to go on soiowa.org/plane pull to sign your team up,” Palmer says.

Palmer says the Iowa event is modeled after one in Maryland that has been held for several years. They have over 3,000 spectators and have an air show involved too. He says they hope to one day maybe have an air show too at their event, but will have lots of other things going on for families and kids.