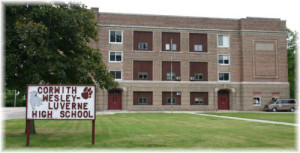 The CWL school is closing as the district disolves.

Today is the final day for Corwith Wesley LuVerne Middle School and High School. The Corwith Wesley District will soon dissolve and LuVerne will begin a sharing agreement with Algona this fall.

The past several weeks have been hard for CWL students and alumni, as the last senior class graduated May 17th.

Esden Carroll was among the final 13 graduates and says the school always felt like a family. “Everyone knows everyone here,” Carroll says. “Everybody knows the ins and outs of everybody. Over there (in Algona), it’s different. You’ve got kids in the same class as you and they’re saying, ‘I don’t even know who that is.'”

Fellow senior John Genrich echoed those sentiments, saying he and his classmates are glad the school stayed open as long as it did. “It was a very big concern growing up,” Genrich says. “Coming through school, all we ever heard every year was how CWL is going to close. We got real lucky.”

Younger students will make their way to Algona schools in the fall. The two districts started sharing sports at the beginning of this school year and many said that will make the transition easier. Current junior Darek Garman says he already has a group of friends at his new school. “I don’t think it’ll be as big of an issue for me,” Garman says. “I’ve been wrestling in Algona for the past three years so I don’t think it’ll be as hard of a transition for me.”

The town of Corwith hosted a large Memorial Day weekend ceremony. Organizers invited all past CWL graduates and held several gatherings where alumni could share stories about their school days. Jonathan Chambers still lives in Corwith and serves on the Corwith-Wesley school board. He says he and others will always carry memories of the school.

“It was just a wonderful experience,” Chambers says. “I had great instructors, we had great administrators and family and parents who really cared. That’s the beauty of a small school.” Jennifer Williams graduated from CWL in 1986 and now lives in St. Paul, Minnesota. She says she wanted to come back for the weekend reunion event as soon as she heard about it.

“This school will never be open again, I’ll never be able to see what’s out today,” Williams says. “I want to remember where I grew up and you want to keep those memories with you the rest of your life. It’s just good to come back and reminisce and remember it all again.” The school sold old uniforms and auctioned off trophies celebrating athletic accomplishments. For many, the event was bittersweet, but it helped give them closure.

Corwith will continue to host Memorial Day celebrations remembering the school. The district gave students a trip to the Iowa Cubs game on Thursday where they honored retiring teachers and science instructor Mr. Funnemark threw out the first pitch. The Corwith-Wesley District will dissolve June 30th with a majority of the district transferring to LuVerne. Students will attend school in LuVerne until 6th grade, at which point they will move to Algona schools.