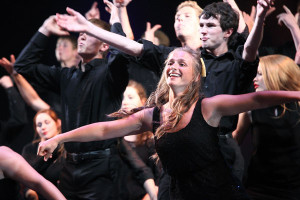 Some of Iowa’s most promising singers, actors and dancers will be onstage in Des Moines next week both to perform and to collect accolades for their efforts.

Eric Olmscheid, director of programming and education at Des Moines Performing Arts, says this is like the Tony Awards for Iowa high school musical performers.

“We have multiple schools being recognized for Outstanding Musical Production,” Olmscheid says. “We have many leads being recognized for Outstanding Leading Role and likewise for Supporting Role and Featured Dancers. We didn’t want one school that may have more resources or a bigger program to dominate over another school but rather for everyone to find success and to be celebrated for their achievements.”

Representatives were sent to each high school’s musical productions during the past school year to seek out the best of the best, and the showcase will feature the top soloists, duets, quartets and full-cast ensembles.

“We’ve seen this grow over time,” Olmscheid says. “This is our third year of the program. The first year we had nine schools, we grew to 17 schools last year and 30 schools this year. We continue to grow the radius within the state. It’s our goal that within five years, we can have this program to be statewide.”

Maybe one in ten high school performers will go on to seek the spotlight as a profession, but Olmscheid says this program isn’t about identifying the next Broadway star.

“For many students, the end of their high school career is the last time they’re going to step on a stage,” he says. “We wanted to find a way to honor that, appreciate that and really look at this as an arts education opportunity. This is far greater than just learning how to be a better actor, singer or dancer on stage, but really a part of something bigger.”

As the number of schools has grown, so has the audience, and Olmscheid says ticket sales are brisk and could sell-out. The showcase is scheduled for Monday night (June 1st) at the Civic Center of Des Moines.