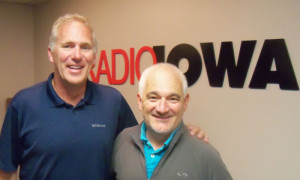 Chuck Long says he enjoys traveling the state to promote the Iowa Games. The former Hawkeye and NFL quarterback was named executive director of the Iowa Sports Foundation last November, the group that runs the Iowa Games.

“I do have a goal to get to every town in the state of Iowa eventually, I don’t have a timetable for that,” Long said.

Long starred for the Hawkeyes in the mid-80s and while his playing and coaching career took him to various stops across the country he always envisioned an eventual return. “I consider it my home state now even though I was raised in Illinois. I just love the state of Iowa and the people,” Long said.

The Summer Iowa Games will include 60 sports and Long says there is a sport for all different ages and levels. “Our mantra this year is ‘You can be an Athlete’ anybody can be an athlete, we have a game for everybody, of all abilities and all ages,” according to Long. He said people might sometimes think only elite athletes participate, but said that is not true.

The Summer games will be held over three weekends in July. The Open Ceremony is July 17th at Iowa State University.