You are here: Home / Crime / Courts / One escaped inmate caught, one still on the run from Warren County 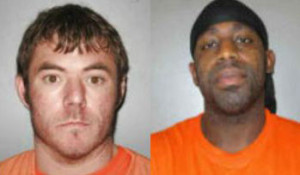 One of the two inmates who escaped from a south-central Iowa jail is back in custody. Twenty-six-year-old Frank Manders of Indianola and 29-year-old Darian Crayton of Des Moines escaped from the Warren County Jail around 4 a.m. Monday.

Sheriff Brian Vos says the two manipulated a locking mechanism on their shared a cell and were able to get away from deputy on duty.

Manders, who was in jail on vehicular homicide and forgery charges, was spotted walking along a gravel road north of Indianola.

He was captured at 4:45 p.m. and returned to the jail. Crayton, who was being held for driving while barred and various probation violations, remains at large.