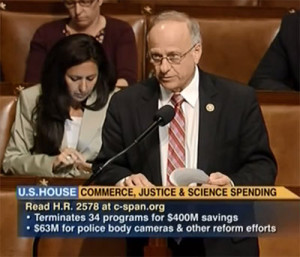 Most of the Republicans in the U.S. House have endorsed Iowa Congressman Steve King’s latest attempt to block President Obama’s executive actions that shield some undocumented immigrants from deportation.

King’s amendment to a bill that outlines spending for the U.S. Justice Department forbids the agency from using federal funds to defend legal challenges to the president’s action.

“A lot of money has been spent and wasted in an attempt to — let’s say the gracious way to say it would be to stretch the constituion beyond any bounds it had been stretched before,” King said during remarks on the House floor today.

King, a Republican from Kiron, successfully offered another amendment to the same bill that would forbid U.S. officials from discussing visas for immigrants during trade negotiations. King said congress stopped such a move during the Bush Administration and there are reports the Obama Administration has discussed U.S. visa policies during negotiations with 11 Asia-Pacific countries.

“There is a long history on this with me and it’s been an important issue to maintain the separation of immigration policy and the congress from the executive branch negotiations in trade,” King said.

The Obama Administration had already threatened to veto an earlier draft of this bill, but the additions of King’s amendments on immigration policy are likely to increase the likelihood of a veto.