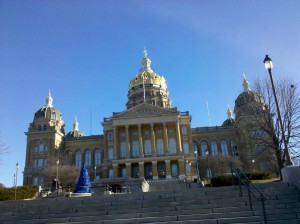 The pace is quickening at the statehouse, as lawmakers aim to conclude the 2015 legislative session this week. Earlier this afternoon, In less than half an hour, a bill that outlines $561 million in spending for the state’s prison system and the Department of Public Safety cleared both the Iowa Senate and the Iowa House and is headed to the governor for review. Senator Rich Taylor, a Democrat from Mount Pleasant, worked at the state’s maximum security prison for 27 years.

“We’re short-changing our prison systems and we’re asking for trouble,” Taylor said. “We need to try to do better to fund these prisons before we have a disaster.”

Representative Todd Taylor, a Democrat from Cedar Rapids who is not related to Senator Taylor, also objected to the level of spending for prisons.

Senator Tom Courtney, a Democrat from Burlington, said there’s a $4 million boost in next year’s budget for these agencies, plus some spending within the budget plan has been reprioritized.

Representative Gary Worthan, a Republican from Storm Lake, said the final product is a compromise that ensures the prison system gets more operating funds.

“This budget will serve the people of Iowa. It will move the state forward and meets the needs of the departments,” Worthan said.

As of today, the state’s nine prisons housed nearly 8,283 inmates. That’s 13.84 percent over the design capacity of the facilities. Another 31,302 people are either being monitored by a parole officer or are living in a community-based correctional facility, like a half-way house or a work-release program.

In other legislative action today, the senate gave final approval to a bill that outlines $986 million in spending at the three public universities, the 15 area community colleges and the Iowa Department of Education. The Senate also gave final approval to a bill that would erase the state sales tax on the fees paid at coin-operated laundromats in Iowa. Iowa is one of just four states that charge the sales tax on the coins collected from the washers and dryers at Laundromats.