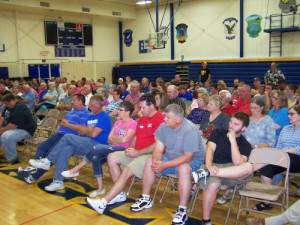 Resident interested in the sharing agreement packed the gym.

Nearly 200 people packed the Marcus-Merriden-Cleghorn gym in Marcus Wednesday as the MMC school board and the Remsen-Union board reached a whole-grade sharing agreement.

Previous attempts to reach an agreement between the two school districts had failed over concerns about where the high school would be located.

Jan Brandhorst is the superintendent for both school districts, and says it was a big step to reach the agreement. “The boards were able to get past one of the things that was, let’s face it, the elephant in the room in the location of where the high school was going to be. I guess time and so forth and getting more facts and everything kind of came together here,” Brandhorst says. “For the first three years at least, the intent is to whole-grade share with the high school being located in Marcus, and the middle school in Remsen.” 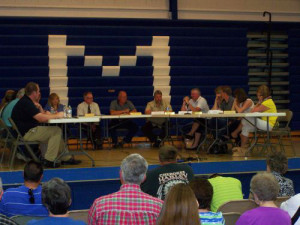 The MMC and Remsen-Union school boards discuss a sharing agreement.

The agreement won’t begin until the 2016-2017 school year. Brandhorst says he was pleased to see so many people from both communities attend the meeting and ask the school boards to “come together.” He says when they began the whole process there was information that people probably didn’t have a chance to fully look at and he says understands people were not just quite ready for the idea of sharing and also possibly giving up their high school.

At one point during the discussion, Remsen-Union school board directors had proposed a “two and two” program, in which the students would attend one high school for two years, and then the high school would switch to the other community for two years. Brandhorst says school board members from both schools soon realized the program would not be practical. And they realized it still might not make everyone happy as they wouldn’t know if the people who were thinking about leaving the district would stay or might move their kids to a district where they could go to the same school for four years.

The superintendent says there are still many decisions that will need to be made including how many teachers will be needed. “That’s one of those sticky wickets that does have to be decided. One of the main reasons that you do whole-grade share is so that you can reduce your general fund expenditures. But, that being said, I think in general attrition and change do have a way of making things work,” Brandhorst says.

Both board voted unanimously to approved the three-year whole-grade sharing agreement.