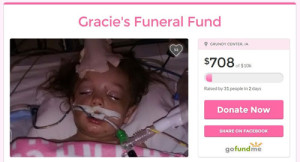 A 4-year-old Waterloo girl has died four days after an incident in her home. A Go Fund Me page set up to help cover medical expenses for Gracie Buss was renamed to collect for funeral expenses.

An update to the page states the girl was taken off life support and died early Wednesday afternoon. The girl sustained serious injuries on Saturday morning and family members told KWWL-TV they believe the injuries were “intentional.”

Waterloo Police have only said they’re investigating and have not revealed who was in the home at the time or how the child suffered the injuries that ultimately led to her death.