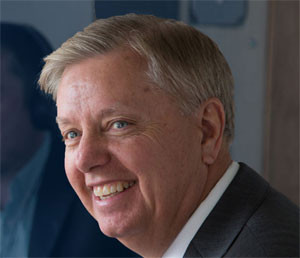 “We should probably change the way we trade with China,” Graham said early this afternoon. “We should put them on notice and we should get with the Europeans. It’s just not us they’re hacking into. It’s easier to steal things than it is to invent it.”

China is suspected of being behind a recent cyber attack which exposed the personal information of an estimated four million federal employees. Graham, who is a South Carolina senator, said he’d like to see the U.S. government provide incentives so the private sector companies will “up their game” when it comes to cyber security.

“We’re not very well prepared against what I think could be a cyber Pearl Harbor,” Graham said. “If you ask me where we’re exposed here, the gaps between us and our adversaries in the convention arena is pretty large, but on cyber not so much.”

Graham made his comments during taping of the “Iowa Press” program which airs tonight on Iowa Public Television. Graham has been campaigning in Iowa today and this morning he unveiled a team of Iowa veterans who are backing his bid for the Republican Party’s 2016 presidential nomination.

“I’ve got a military coalition to die for,” Graham said this afternoon. “General Ron Dardis, the former head of the Iowa National Guard — he is leading the coalition (and) Chris Fox, a retired command sergeant major. These were Joni Ernst’s go-to people when it came to her veterans coalition. We’re going to organize the Iowa National Guard veterans community the best we can and we’re going to ask every Iowan to think about Commander in Chief when you vote.”

Graham retired last week after a 33 year career in the military. This past Monday he formally kicked off his presidential bid with a speech in his hometown of Central, South Carolina. Graham is among the seven declared and likely Republican presidential candidates who will attend tomorrow’s “Roast and Ride” event in Boone hosted by U.S. Senator Joni Ernst.