You are here: Home / Sports / Hoiberg returns to Ames to say goodbye to Cyclone players 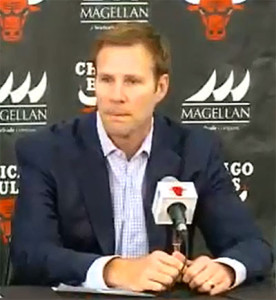 Former Iowa State coach Fred Hoiberg returned to Ames to tie up some loose ends and say goodbye to his players. After five years on the Cyclone bench Hoiberg was named the new coach of the Chicago Bulls this week.

“Obviously the closer you are as a team, the better chance you have to win, and that’s what these guys have done,” Hoiberg says. “I’m looking forward to seeing them all today andgetting together with them. It’s going to be really emotional.”

Hoiberg says he has visited with athletic director Jamie Pollard about the future of the program but did not endorse a potential successor. He says he is fully confident that Pollard will make a great hire with the help of President Stephen Leath.

Cyclone assistant T.J. Otzelberger is expected to be interviewed. Hoiberg says he did not bring Otzelberger back from Washington with the idea of him taking over. Hoiberg says those rumors are “absolutely not the case.” He says he brought him back because of the great amount of respect he has for Otzelberger and the job he did before.