You are here: Home / Health / Medicine / Rain and heat bringing out mosquitoes 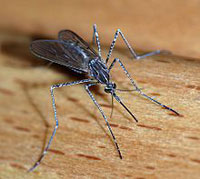 Summer will arrive June 21st and already Iowans are being buzzed and bitten by mosquitoes. Brendan Dunphy, an entomology researcher at Iowa State University, says he’s been studying the habits of these tiny flying pest for years and spotted his first mosquito of 2015 in Boone County back in March.

“What was happening was, they were simply coming out of their winter hiding places,” Dunphy says. “Now that we’re in the time of year when we’ll have consistently high temperatures, we have the type of environment that could sustain mosquito activity for months to come.”

Dunphy said the mosquito bites can make people sick but the bugs are much worse on other continents. “They are capable of transmitting human disease agents, plenty of viruses, West Nile virus would be the best example here in Iowa,” Dunphy says. “Also, a number of other things that are even more pathogenic and cause death in other parts of the world. Thankfully, in a place like Iowa, we have it relatively easy compared to sub-Saharan Africa.” He urges Iowans to police their yards to make it harder for mosquitoes to find a home.

“Getting rid of sources of standing water on your own property,” Dunphy says. “Bird baths, tires, buckets, children’s swimming pools, turned-over truck toppers, anything that can collect water can essentially be a reservoir or a breeding ground for future generations of mosquitoes, including ones that can transmit viruses.”

Another recommendation is to wear long-sleeve shirts and use insect repellant when outdoors and staying indoors around dawn and dusk when mosquito activity is often the highest.