You are here: Home / Agriculture / Bird flu cases appear to be dropping as clean up continues 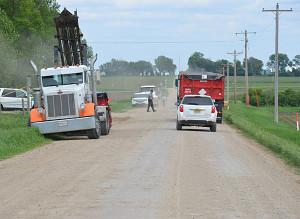 Trucks working to haul away dead birds in northwest Iowa.

The number of reported cases of the bird flu has been dropping and Thursday and Friday of last week ended with no new cases reported. There was one case announced today, and Iowa Department of Agriculture Deputy Secretary Mike Naig says it’s encouraging to see cases drop.

“We’re finally starting to see a slow down in the number of cases that are announced — we definitely kind of hit the high-water mark in terms the rate that we were announcing sites back at the first part of May — and we’ve seen it trail off since then,” Naig says. “We’ve had a couple of days here with no new commercial sites being announced and the weather is starting to look a little bit better from a temperature standpoint, which does help with curtailing the virus.”

Officials say the virus likes cooler temperatures, and the weather in Iowa remained cool as the outbreak took hold in the state.)”When you need hot and dry and you end up with cool and wet like we’ve had, that didn’t help us much on the weather front. But you look at the week ahead, and things seem to be improving,” Naig says.

The state had reported 75 cases of the bird flu at the end of last week. “That represents about 31-and-a-half million birds that were affected on those 75 sites. So, a significant challenge to quickly and safely depopulate those birds and safely dispose of them,” according to Naig. He says around 90 percent of the animals had been disposed of as of Sunday.

Workers clean a truck used to haul away dead birds.

Some of the facility operators are burying the dead birds on site. “But there’s some that can’t just because of where they are situated or whether they have available land. “There has been a lot of composting that’s been done on site. In the case of our turkey operations — those have been exclusively composted on site in their buildings,” Naig says. “There’s also several incinerators that are operating in the state. A small percentage of the total disposal is going through incineration. And then landfills have been really something that have started to come on-line here in the last couple of weeks.”

Naig hopes the drop in cases is an indication the end is in sight. “It certainly is good to see the numbers start to trail off and we would hope that we would very, very soon have announced the last positive site. And we are hopeful for that,” Naig says. “There’s a lot of folks hurting out there, a lot of producers who are watching their operations go through turmoil, a lot of negative economic impact on the communities that surround these operations. So, we are all very,very anxious to return to normal operation.”

Governor Terry Branstad declared a statewide disaster emergency on May first following the bird flu outbreak, and later extended that emergency to run through June. In a related matter, Iowa’s two U.S. Senators, Joni Ernst and Chuck Grassley, are calling for a hearing to review the federal government’s response to the avian influenza outbreak.

Photos courtesy of the U.S.D.A