You are here: Home / Sports / Former Panther star shows his stuff to NBA teams prior to draft 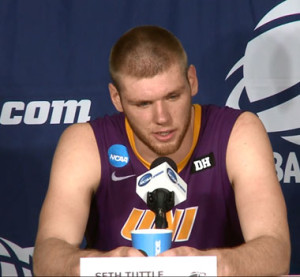 Seth Tuttle talked with the media after a loss to Louisville in the NCAA tourney.

Former UNI standout Seth Tuttle has been on the road working out in front of NBA scouts, general managers and coaches. The private workouts were with six NBA teams thus far with the latest being the Portland Trailblazers.

Tuttle says he has been on the road for 12 days, visiting the Lakers, Suns, Mavericks, Clippers and Portland.

Ten NBA teams sent scouts to a much larger workout in Florida, Friday to watch Tuttle and a host of other prospects. He says the more secluded workouts consist of six prospects, two guards, two forwards and two bigs.

Tuttle says he is going into the draft with realistic expectations. “Obviously I’m not a top 10 top 5 lottery pick, I am a realistic about that. There’s a whole bunch of kids who are just fighting for 60 spots,” Tuttle says. He believes he is on the radars of some of the teams and says he has had some good workouts with the teams.

Tuttle will have to wait until Thursday, June 25th to see if his name is called during the NBA Draft.