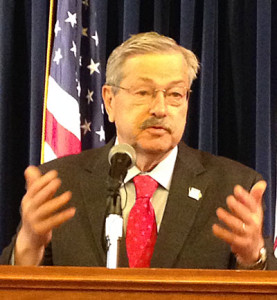 Governor Terry Branstad today said the legislature’s failure to decide how much state aid Iowa’s public schools will get for the 2016/2017 school year is a disappointment. When pressed by reporters this morning during his weekly news conference, Branstad wouldn’t rule out calling lawmakers back to Des Moines in special session to make the decision.

“I’m not going to speculate,” Branstad said. “You all can speculate all you want to, but I’m just going to wait until I see all the bills and try to choose the course of action that I think makes the most sense.”

The 2015 legislative session ended Friday and legislators approved a 1.25 percent increase in general state aid for the school year that starts this fall, plus lawmakers voted to give schools a one-time allotment of $55 million. Branstad calls that bad budgeting, although he approved a similar move in 2013. He may use his item veto authority to reject that additional $55 million for schools.

“I don’t like the idea of one-time money,” Branstad said. “The problem with one-time money is you really can’t use it for salaries because it’s not going to be there the next year.”

Branstad has ’til July 4 to make decisions on the bills legislators passed this year. Branstad says just because the legislature has gone home doesn’t mean he should stop thinking about new approaches and compromises that might be passed in a special legislative session this summer or fall.

“I’ve heard from schools and I’ve heard from Iowans that they don’t like this constant fight, that they want us to come together and they want us to work to do within what’s fiscally possible, what’s financially responsible under the economic conditions that exist, but they want us to resolve these things in a way that provides stability and predictability,” Branstad said. “And that’s what I’m going to try to do is review everything and determine what’s the best course of action under the circumstances.”

The legislature also voted to keep the state-run Mental Health Institutes in Clarinda open ’til mid-December and the MHI in Mount Pleasant open ’til next June. Brnastad’s not saying whether he’ll accept that.

“I’m not going to speculate on this until I have a chance to carefully review and analyze how it all fits together,” Branstad said today. “I want to look at the entire budget and what is sustainable over the long term.”

Critics of Branstad’s move to close the two Mental Health Institutes say there aren’t enough services available for mentally ill Iowans today and the closures make the problem worse. The Clarinda facility has housed elderly patients who are too frail or aggressive to be cared for in private facilities. A few are convicted sex offenders and private nursing homes have been reluctant to accept them as patients.