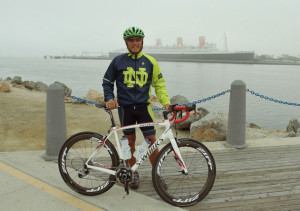 Greg Crawford during his 2013 bike ride.

The dean of the University of Notre Dame’s College of Science is pedaling his bicycle across Iowa this week to raise awareness and money about a rare childhood disease that’s always fatal.

Greg Crawford is about halfway through his cross-country “Road to Discovery” ride that’s taking him from New York to California. Crawford is educating people along the way about Niemann-Pick Type C disease, or NPC.

It’s often diagnosed between the ages of 3 and 5 and progresses slowly. “The child can’t process cholesterol properly or metabolize it, as we say,” Crawford says. “It starts to build up in all of your organs and your cells and ultimately, in the brain, and it becomes neurodegenerative. When that happens, the final days are in a wheelchair with a feeding tube, you can’t eat, you can’t walk, you can’t talk and kids typically only live into their early teens.”

The genetic disorder claimed the lives of three of the four grandchildren of Ara Parseghian, the Notre Dame football coach from 1964 to ’74. Crawford will spend about 4 weeks making the two-wheeled trek across America, covering between 100 and 150 miles a day and a total of about 3,000 miles from coast-to-coast.

After stops in Davenport and Iowa City, Crawford plans to be in Des Moines for an event on Wednesday. Another stop is scheduled in Omaha on Thursday. “We have towns that are picked out from Long Island, New York, all the way to Pebble Beach, California,” Crawford says. “Those towns or cities have a lot of Notre Dame alumni and typically, alumni rally around this cause and we’ll have events like fundraisers, auctions, good times and we actually ask for money to support research into this rare disease.”

This is the 5th year Crawford has biked across the country to raise funds and awareness for NPC and he says, it may be the last year. About a million dollars was raised during the first four trips and this year’s goal is another full million dollars.

“What happened over the past two years is that one of our professors at Notre Dame actually discovered a drug that was repurposed for this rare disease called NPC,” Crawford says. “The drug is now in clinical trials in phase one. We’re hoping to raise money with this ride to get it to phase two and phase three trials in the very near future.”