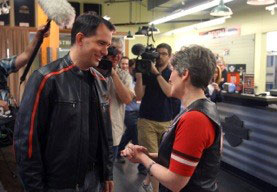 The site of Joni Ernst’s inaugural “Roast and Ride” this past weekend is where Republicans intend to hold their Iowa Straw Poll two months from now.

Critics call the contest meaningless, as campaigns often buy straw poll tickets for supporters and past winners like Michele Bachmann have fizzled ultimately as candidates. So far no 2016 candidate has committed to participating in this year’s Straw Poll, to be held on the grassy fields near Boone where the Farm Progress Show is often staged.

Wisconsin Governor Scott Walker isn’t an official candidate yet — and he was non-committal Saturday.

“Should we be a candidate, we’ll be in Iowa quite a bit,” Walker told reporters. “Whether or not the Straw Poll is a part of that remains to be seen.”

Jeb Bush, Marco Rubio, Mike Huckabee and Lindsey Graham have all said they will not participate. Ben Berringer of Lake Mills made the trip to Boone this past Saturday and he’s hoping to make the return trip two months from now to see candidates like Ted Cruz, who wasn’t there Saturday.

“We’re going to try to get back, if at all possible,” Berringer said.

Republican Congressman Steve King gave a full-throated pitch for the Straw Poll on Saturday, arguing its value is in winnowing the field, especially this year when so many candidates are in the race.

A recent Des Moines Register/Bloomberg Politics poll found only half of Iowa Republicans think it’s important for candidates to attend the Straw Poll. The event is a fundraiser for the Republican Party of Iowa and tickets to the 2015 Straw Poll are $30 each. The first Iowa Straw Poll was held in Ames in August of 1979. Ever since, it has been held the summer before a presidential campaign year in which Republicans have a competitive race for the White House.