You are here: Home / Military / Greenfield to host opening of ‘Bonds of War’ play 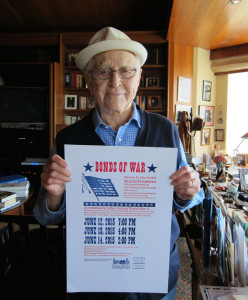 Norman Lear holding a poster for the play.

The southwest Iowa town of Greenfield is hosting the world premiere of a play this weekend to coincide with Flag Day, a play set in Greenfield during World War Two. Des Moines playwright John Busbee was commissioned to write the two-act play called “Bonds of War,” which is centered on the real-life editor of the Adair County Free Press newspaper during that era, a man named Ken Sidey.

“A lot of his editorials are used in this play which really kind of serves as the heart and soul for the content of the show,” Busbee says. “Really, it’s about how a county and a community bonds, thus the name ‘Bonds of War,’ through the war effort.” The play aims to bring the spirit and the challenges of the 1940s era alive again onstage, recreating some of the staples of that time, complete with scrap drives, paper drives and big band music.

“I used two actual characters, K.H. or Ken Sidey, plus I used Mamie Lynam,” Busbee says. “She was a character. She was a hoot. She was a social reporter. The rest are fictionalized characters but I used real places and real events from the time period.” 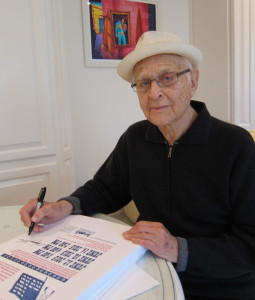 Norman Lear signs a poster for the play “Bonds of War.”

The show will be performed in the recently-dedicated Norman Lear Theater in the Warren Cultural Center. Lear directed his first movie, “Cold Turkey,” in Greenfield in 1969 and went on to much success in television, producing shows including, “All In The Family,” “Maude,” “The Jeffersons,” and “Sanford and Son.”

Busbee says the 92-year-old Lear autographed posters of the “Bonds of War” play that are being sold to help pay for the production. “He has maintained a rock solid relationship with Greenfield especially but also with Iowa,” Busbee says. “When he was here last December, he did a presentation in Greenfield and the folks at the Warren Cultural Center surprised him by dedicating the stage space as the Norman Lear Theater, and he was truly touched.”

Busbee says it’s possible Lear will be in Greenfield for one or more of this weekend’s performances. A host of other events and activities are being planned in the community through Sunday. The play will be performed three times — Friday night, Saturday afternoon and Sunday afternoon.