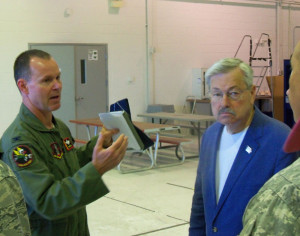 The governor and lieutenant governor toured the 132nd Wing of the Iowa Air National Guard today in Des Moines to get an update on the progress as the wing continues its shift from flying F-16’s to three other new missions.

One of those missions involves cyber defense. Tech Sergeant Nate Subra told Governor Terry Branstad that they handle missions for the military, but also can help out state government.

“So you’ll be a resource that’s going to be able to help us in state government if we have an effort to hack into our system,” Branstad says. “Yes sir, We have fulltime operators here, we have technicians and we have people like myself. I’m actually a traditional guardsman, and one of my jobs on the outside is actually cybersecurity,” Subra replied.

General Timothy Orr, the commander of the Iowa National Guard, elaborated on the guard’s ability. “Let’s says there’s a cyber event in the state and Homeland Security would say ‘hey we need capability.’ They would reach out just like we do for a disaster on state active duty. The could bring members or the unit all on duty to come and support the state network, whatever those needs are,” Orr says. 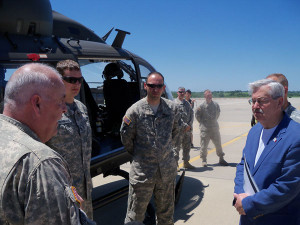 Governor Branstad gets a look at one of 4 Lakota helicopters operated by the Iowa Air Guard.

Orr says the Cyber Operations Unit is a draw for those who have experience. “This is one of those new enduring missions that also has a great civilian skill set, so as you attract Microsoft, as we Facebook, and other companies that come here, it’s a great opportunity for them,” Orr says. Orr says the technicians can work for those companies while also being in the guard.

The other two new missions are the “remotely piloted aircraft”, commonly referred to as drones, and the Intelligence Group. Guard spokesman, Colonel Greg Hapgood, says they are 2 years into the 3-year transition. “The 132nd Wing is actually ahead of schedule for their transition to remotely piloted aircraft and intelligence, surveillance and reconnaissance group,” Hapgood says. “They are probably within about six to 12 months of initial operating capability. And once they get to that stage, it’s probably 18 to 24 months before they are fully operational.”

The transition includes the remodeling of several areas to provide the space needed to conduct their missions. Hapgood says the number of Air Guard personnel is very close to what they had before the transition. “Here are the unit there are approximately 350 full-time airmen who are employed every day. But if you look at the number of airmen that we have that are part-time airmen, that brings the total unit strength up to about a thousand airmen — which is where it was when they flew F-16 aircraft,”Hapgood explains. 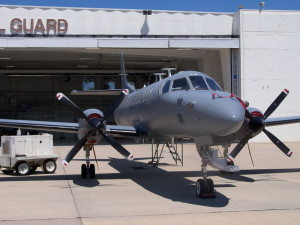 The governor and lieutenant governor were also shown various pieces of equipment used by the Iowa National Guard. That included the RC-26 aircraft, which can take aerial pictures. General Orr told the governor in the past when they needed aerial photos of the flooding Mississippi River, they had to request a plane from Wisconsin’s National Guard.

Orr says they were able to use that plane to fly the Mississippi to get photos of key dams and levees while sitting in the operations center at Camp Dodge. “And we were able to get hours and hours of footage to make decisions to provide the administration with what we needed to do,” Orr says.

The tour also included viewing two helicopters and other equipment that can be used by the state during natural disasters.