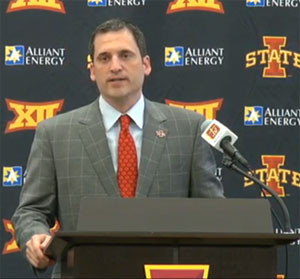 The Iowa State coaching job first popped up on Steve Prohm’s radar several weeks ago when Fred Hoiberg’s name was connected to a potential opening with the Chicago Bulls.

What once was considered “far-fetched” became a reality this morning when Prohm was introduced as the new head coach of the Cyclones. Prohm says he  got a call a couple of weeks ago from his agent who told him ISU Athletic Director Jamie Pollard had interest in him.

Prohm spent the past four years at Murray State where his up tempo style of play produced a 104-29 record and national coach of the year honors in 2012. “The better you are defensively, the faster you can play. But playing fast doesn’t mean taking crazy shots, playing fast means running the floor, having good spacing,” Prohm says.

Prohm inherits an experienced that many believe will begin next season ranked in the top five in the country. He says that’s the great thing about coming from Murray State where they have great expectations too. “You win 29 games, they want 30. You win 31, they wanted 32. You get to the top 10 in the country one year and they want to know why you aren’t there every year,” Prohm says.

Prohm says the way to handle lofty expectations is to take a short term approach and not focus on the big picture. Prohm will spent the remainder of this week getting to know the players then focus on hiring a staff.

Pollard says they wanted to find a coach that would fit the personality of the current roster. He says when he talked to the basketball players, style of play and demeanor mattered.

Pollard says they were looking for a coach who could win with the current players and keep the momentum going down the road. He says they have to be able to capitalize on the excitement of the current team, but the coach also has to be able to recruit to compete in the Big 12.