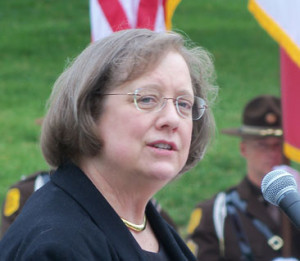 Law enforcement officials from a dozen states who work in safety education are meeting in Des Moines this week for training sessions. Iowa Department of Public Safety Commissioner Roxanne Ryan says when she was taking driver’s ed in high school, a state trooper came into the classroom to stress the importance of wearing a seat belt.

“I don’t think I’ve ever driven a car since then or ridden in a car since then without wearing a seat belt,” Ryan says. “That was back in the ’60s when most people were not even talking about seat belts, but he changed the way that I lived my life and that’s why I think it’s so important to have the safety education programs.”

Ryan says safety education officers make an “enormous difference” in their communities and their states.

“We can affect how people make decisions at a very young age and we can reinforce that throughout their lifetimes,” Ryan says. “We can sve lives instead of investigating collisions, we can get people on a law-abiding route instead of the other direction and by doing that, we can save ourselves a lot of resources, a lot of time and a lot of heartache for a lot of other people.”

Colonel Michael Van Berkum, chief of the Iowa State Patrol, says the officers who’re here this week should be praised for taking the time to train.

“Right now in our society we’re kind of getting a little bad rap, but we’re doing exactly what we’re supposed to do,” Van Berkum says.

The Uniformed Safety Education Officer Workshop began Monday and concludes Thursday. The group’s first ever training session was held in 1968, with education safety officers from Iowa and five other states meeting in Nebraska. There are now 22 states and some Canadian provinces that are part of the training group.