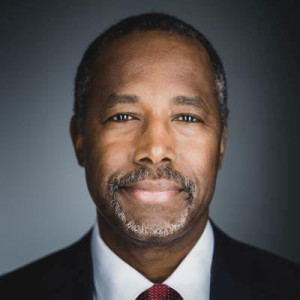 Carson urged the crowd “not to be manipulated from the right or the left” and to be skeptical of the “purveyors of division” that he argues are endangering the country’s survival.

“We live in dire times because there are people outside of this nation who want to destroy us.” Carson said. “They want to destroy our way of life and the best thing that we can do is to fight each other.”

Carson said Saddam Hussein was “a horrible guy” but in 2003 Carson opposed the Iraq War because he feared it would “destabilize” Iraq. Carson also faulted President Obama for withdrawing U.S. troops from Iraq prematurely and for failing to defeat the “Islamic jihadists” that have taken control of large sections of Iraq and Syria.

“Every single day that we allow them to expand and grow is another day that’s going to cost us more lives and more money…Our only choice is to destroy them while we can,” Carson said. “…I’m a dove, but I’m what’s known as a pragmatic dove. Pragmatic doves do not allow themselves to be destroyed. They will do what they need to do to preserve themselves.”

Carson also touched on issues like immigration, the federal debt and ObamaCare during his 30-minute speech. Carson is a retired brain surgeon and the host of the Westside Conservative Breakfast Club quipped that Carson’s cutting skills are sharper than the ones Joni Ernst touted in her Senate race last year.

“Referring to my cutting, my wife always refers to me as a cut-up,” Carson said, laughing along with the crowd.

Carson began his speech by saying as a kid he thought about becoming a missionary doctor.

“Later on in high school I decided, you know, I’d rather be rich, so missionary doctor was out,” Carson said, as he and the crowd laughed. “And then I decided you know, psychiatrists — they seem like rich people. I want to be a psychiatrist because all they have to do is talk to crazy people all day…but then in medical school I start meeting a bunch of psychiatrists, so I said, ‘No, that’s not going to be who I am.”

Then Carson got serious, telling the crowd he started thinking about what “special gifts and talents” he had been given by God.

“I realized that I had a lot of eye-hand coordination. I was able to think in three dimensions. I was a very careful person. I never knocked things over and said, ‘Oops!’ That’s a good characteristic for a brain surgeon, by the way,” Carson said, to laughter. “And I loved to dissect things and I kind of put that all together and that’s what made me decide on neurosurgery.”

Carson said God gave him an “amazing, basically untouchable career” that led his to serve on multi-national corporate boards and travel to 57 different countries — experience he said has prepared him for the presidency.

“I’m not an in-your-face type of person, but I don’t back down easily,”

AUDIO of Carson’s speech at The Machine Shed in Urbandale