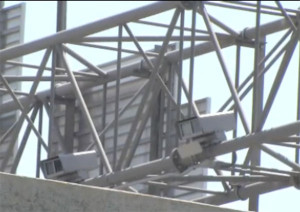 The Cedar Rapids City Council voted Tuesday to sue the Iowa Department of Transportation to keep the city’s network of traffic enforcement cameras in place. Cedar Rapids was asked to remove cameras in three locations and make modifications to other cameras.

The council held an 80-minute closed session, which state law permits when elected officials are discussing litigation or possible litigation, and then voted unanimously to go to court. Mayor Ron Corbett told KCRG TV Police Chief Wayne Jerman and the city’s legal staff helped convince the council to fight in court to keep the cameras where they are.

“There was a strong support for the safety data that Cedar Rapids has shown,” Corebett says. “There’s a strong disagreement with the DOT and how they are trying to usurp home rules.” After the council decision and vote, Jerman said the city’s crash data has made the case and continues to make the case that enforcement cameras make for fewer crashes and fewer injuries.

“I don’t understand how someone would go against a proven, measure system, that save lives,” Jerman says. Council member Justin Shields told KCRG TV he is also a strong supporter of going to court. “It’s not a really a dollars and cents issue. It’s whether or not we were doing the right thing,” Shields says.

Mayor Corbett says one compelling piece of evidence is that there has not been any deaths on the crash prone S-curve on Interstate 380 since cameras have gone up in two locations northbound and two locations southbound at the curve. The city has had cameras in place since early 2010, but last year, the DOT began requiring Iowa cities with cameras to submit crash-data reports to make the case to keep cameras in place.

The DOT in March ordered 10 of 34 cameras to come down in Sioux City, Des Moines, Davenport, Muscatine and Council Bluffs. Sioux City has already filed suit and Des Moines officials say they will too. Cedar Rapids city officials have estimated that they will lose $2.2 million of the $3 million in net revenue from its enforcement cameras if it complies with the DOT order.