You are here: Home / News / Iowa Air Guard Reaper pilots waiting on completion of home base 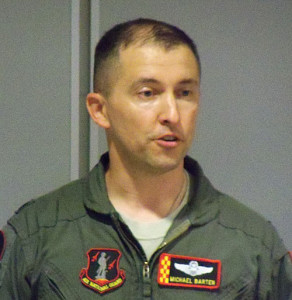 Iowa Air National Guard pilots are anxiously awaiting the time when they can once again have regular flight time from their base in Des Moines. The 132nd Wing shifted from F-16 jets to flying the un-manned MQ-9 Reaper in 2013. Lieutenant Colonel Mike Barten says the crews are trained, but the remodeling work continues on the facility in Iowa.

“We right now are not operating out of here. We’ve got over 10 crews trained — so probably about 35 people — and they are traveling to other locations to continue their training and stay current in the airplane,” Barten says. He says they should be fully operational before the end of this year. “This fall we expect to have the capability here, all of our equipment set up, the comm infrastructure installed, and then we will be able to do that same mission, 24-seven here in Des Moines,” according to Barten. 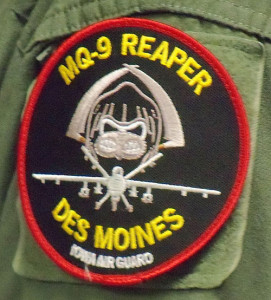 There is a crew consisting of one pilot, one sensor operator and one intelligence coordinator. “Our crews are traveling once a month for about a week or so each — which takes time away from everything else — both setting up the mission here and being away from their families,” Barten explains. “So, we want to get it set up as soon as we could. And that’s one of the great things that I see, is that everyone is pulling towards that goal of keeping things moving and getting it all set up.”

There is a two second delay in sending information from their controls to the plane, so the Iowa pilots take over once the bird is up in the air.

“In order to safely take off and land, there is a crew wherever the airplane is physically itself,” Barten says. “They sit in the console just like we do, but they use a line-of-sight frequency to communicate with the airplane, and they are able to without almost no latency, to take off and land safely.”

The Iowa crews fly all over the world in support of various missions. “The whole goal is to get that sensor where you need it to be. So, as pilots we focus on keeping the airplane in the right place. That might be on the west side based on the sun angle or something today and somewhere else the next time,” Barten says. “And then the sensor’s obvious focus is on the ground. And then the intelligence coordinator focuses on collecting all that and getting information to the right people.”

The Iowans have flown more than 700 missions, some involving weapons, some not. “We do have a weapons capability. I don’t know the number, but I would say the vast majority of what we do is reconniassance,” Barten says. He cited an example of a mission where soldiers in the field were exhausted and requested that they fly a support mission to keep an eye out for any threats while they took some time to sleep. Barten could not be more specific on where they have flown missions due for security reasons.