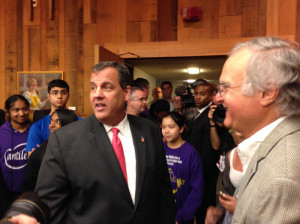 The New Jersey governor proposes “unbundling” college costs. Christie said universities are using student tuition and fees on things like rock climbing walls that not every student will use and low income students shouldn’t have to pay for.

“Let’s allow students to just pay for the education and not all the add ons,” Christie said. “So there’s huge value, obviously, in students getting a full college experience, like the rock climbing wall, but for students from low income backgrounds those extra costs can mean the difference between going to college and not going to college.”

Christie delivered a nearly hour-long speech on the Iowa State University campus late this morning, outlining some of his ideas for improving higher education. Christie also touted steps he’s taken in New Jersey’s K-12 public schools to tie teacher pay to performance and changing teacher tenure rules. Christie said there should be a national effort to get rid of the “last hired, first fired” rules in teacher contracts. 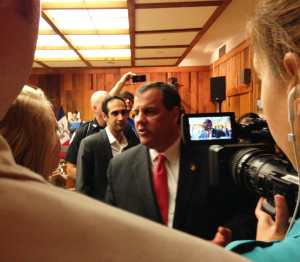 Chris Christie talks with people after his speech at Iowa State University.

“I believe in this country we need a president who will fight for parents and their children, to put them in control of their education and not the unions and the education establishment who is, by the way, in control of it today in our country,” Christie said. “…Let’s put childrens’ interests before special interests. Let’s demand that every child in this country gets a great education.”

“I’ve been following him for a couple of years, so I’ve got a lot of interest in Governor Christie and this is my first opportunity to hear him in person,” Anderson said. “I was impressed and still have strong support for what he might do.”

Thurston Gable of Harley is an Iowa State student who plans to be a history teacher.

“As someone that’s got a pretty large stake in education for the rest of my life, I loved everything he stood for,” Gable said. “I want to work hard. I want to be judged by my own merits and my own work ethic and not by what a union negotiator says on behalf.”

Nineteen-year-old Caleb Bell grew up in Ames, is attending the University of Iowa and plans to volunteer for one of the Republican presidential candidates — but isn’t ready to sign up for Christie or any of the others just yet.

“I’m looking at a lot of them, but Governor Rick Perry has really caught my eye recently,” Bell said. “But there’s been a lot of great candidates. I’m just getting out here to see what they all have to say and getting ready to go into Caucus season and on to the election.”

Governor Christie visited a popular restaurant in Ames early this afternoon to chat with customers. This evening he’ll be in Des Moines to speak at a fundraiser for Polk County Republicans.