You are here: Home / News / O’Malley, Sanders, then Clinton in Iowa this weekend 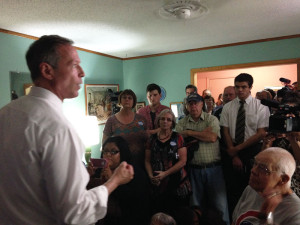 Over 60 Democrats crowded into a Marshalltown Iowa home this afternoon to meet Democratic presidential candidate Martin O’Malley — and he captured a few converts.

Dan Schmitt, an 85-year-old farmer from Marshalltown, said O’Malley will have his vote in the 2016 Iowa Caucuses. Schmitt likes O’Malley’s call to restore some of the banking regulations enacted in 1933 — rules that until 1999 effectively separated commercial banking from investment banking.

“If we don’t get that taken care of, our economy’s going to kill us and if we don’t get it solved, we’re going to go through another ’08,” Schmitt said.

“Tell me how it is that you can get pulled over for a broken tail light in our country, but if you wreck the country’s economy, you’re untouchable,” O’Malley said.

“What a wonderful turnout,” Schwartz said as she stood on the home’s front porch as people filed out the front door. “…You know, I don’t think we should just assume that Hillary’s got it. It’s just nice to know there are other really good people out there.”

Vermont Senator Bernie Sanders will be out here in Iowa this weekend, starting with an event Friday evening at Drake University. Hillary Clinton is due here Saturday and Sunday. Iowa is Clinton’s first destination after her campaign kick-off event in New York.

Seventy-five-year-old Chuck Kruse of Conrad, a part-time school bus driver, was there to hear O’Malley this afternoon, but he is “partial” to Clinton.

“She’s not only known here, but she’s known worldwide. I think she has a lot of experience dealing with these other countries,” said Kruse, who voted for Clinton in the 2008 Iowa Caucuses. “I must say, I kind of favor her.”

O’Malley did not mention any of the other Democrats or Republicans who are campaigning for the White House. O’Malley, though, stressed to the crowd that he has his own Iowa Caucus roots, working on Gary Hart’s 1984 campaign.

O’Malley’s host in Marshalltown was Mark Smith, a Democratic lawmaker who is the minority leader in the Iowa House of Representatives. O’Malley stopped at another house party in Mount Vernon a couple of hours later. He plans to end the evening by greeting supporters and potential supporters at a pub in Iowa City.