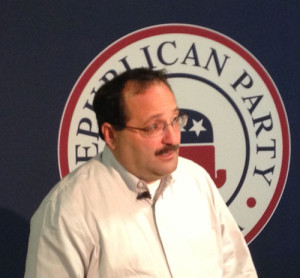 What would happen if you planned a huge party and none of the guests of honor agreed to show up? Iowa Republican Party leaders faced that dilemma since no one in the GOP’s huge field of presidential hopefuls had agreed to participate in the Iowa Straw Poll — so the event has been canceled.

Iowa GOP chairman Jeff Kaufmann met by phone with members of the party’s state central committee early this morning to cancel the event.

“If you do not have candidate interest, you do not have the financial dollars to actually even break even,” Kaufmann said immediately after the decision was made. “…We set the table and they didn’t come to dinner.”

It was a unanimous decision, but Kaufmann told reporters from Radio Iowa and The Des Moines Register he is disappointed.

Ames had been the site for the past six Straw Polls, but hoping to spur renewed interest and reduce costs, party leaders selected the Central Iowa Expo grounds near Boone as the site for this summer’s Straw Poll. In November of 2012 Iowa’s Republican governor, Terry Branstad, said the Straw Poll had “outlived its usefulness” and he predicted the event’s fate would rest in the hands of the candidates, which proved to be the case.

Chuck Laudner was the Iowa Republican Party’s executive director in 2007 and he was in charge of running the Straw Poll that year.  Laudner is a “huge fan” of the event and laments its rather ignominious end.

“Nature will fill that void,” said Laudner, who is now working for Donald Trump. “What replaces it may be ten times worse.”

When the Iowa GOP’s state central committee voted unanimously this past January to proceed with plans for the Straw Poll this August, a few committee members argued the 2015 edition would be crucial in winnowing the field. After the 1999 event, for example, Elizabeth Dole and Lamar Alexander ended their campaigns after disappointing finishes in the Straw Poll.

Laudner said that winnowing is needed even more this year, with so many candidates in the race.

“Short of a debate, there is no better way for the candidates to separate themselves than the (Iowa) Straw Poll,” Laudner said.

The event started as a low-key barbecue fundraiser in 1979 and gained a foothold in political lore when George Herbert Walker Bush was the surprise winner over Ronald Reagan. The 1987 Iowa Straw Poll victor was televangelist Pat Robinson, a signal of the growing influence of Christian conservatives in the Republican Party.

There was a tie in the 1995 Iowa Straw Poll between Kansas Senator Bob Dole and Texas Senator Phil Gramm.  The 1999 Straw Poll was perhaps the biggest of them all, with candidates like Steve Forbes erecting an air conditioned tent for supporters who were served a meal and entertained by musicians Debbie Boone and Ronnie Milsap.  Mike Huckabee finished a surprising second in the 2007 Straw Poll, a signal he was becoming the consensus candidate for Christian conservatives.

Michele Bachmann’s 2011 Iowa Straw Poll victory is often cited as an indication of the event’s poor record in predicting the winner of Iowa Caucus night, as Bachmann finished last in the Caucuses.